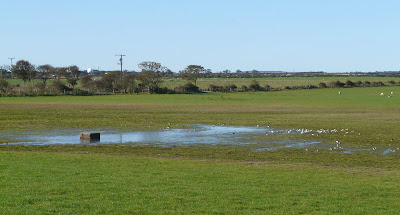 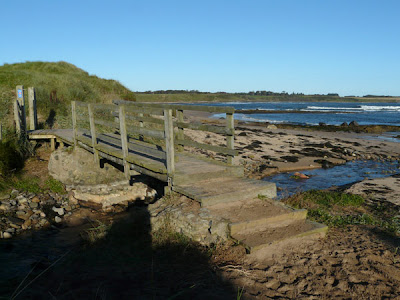 The bridge over to the Low Steads... 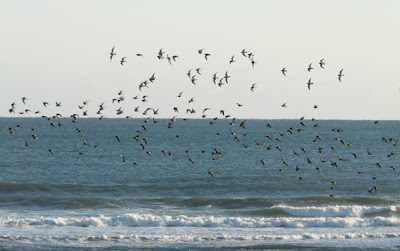 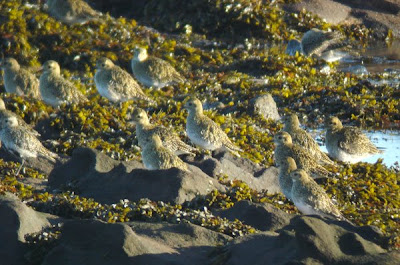 Some of the Golden Plovers in flight and on the rocks...

Sunny, breezy with a Mod W5. Cold in the morning warmer after lunchtime.

On a generally quiet day, I spent the morning at Boulmer, covering both the Low Steads end and the Foxton Golfcourse roadside scrub.

At sea, a good number of Gannets moved north distantly as did 2 Shag, 1 Red throated Diver, 2 Razorbill and 2 Grebe sp. The grebes were frustrating due to the distance (on the edge of science) involved but if I had to guess, I'd suggest Slavonians. Best forgotten.

A few geese were on the move south - a flock of 100 Pinkfeet and 10 Barnacles plus another 60 Pinkfeet then 20 Greylags.

Waders on the rocks at Longhoughton Steel included 212+ Golden Plover with as many on the fields behind, 8 Knot, 3 Ringed Plover, 48 Dunlin, 6 Bar tailed Godwits and a Grey Plover. The now almost dry Mere, soon to be a five a side pitch again, still had 53 Redshank, 3 Black tailed Godwit and a Ruff. Probably my last Swallow on the patch still hawked around over the soggy field.

An unusual record of 8 Long tailed Tits were seen several times in the village with a Chiffchaff in tow, while a Treecreeper in the plantation was a less than annual record here, 2 Buzzards mewed and soared overhead. 2 Grey and 6 Pied Wagtails, 3 Stonechats and a Rock Pipit were on the shore.

Of the 'not birds', 2 Red Admirals, a Weasel, the Red Arrows (4 of them) and a Hercules type troop carrier all made an appearance...
Posted by Stewart at 10:42 pm

An impressive list there Boulmer. What a great place to have on your doorstep. :)