I'm sure we all have our 'heros', people who we look up to and respect for whatever reason. I'm not talking Ghandi or Martin Luther King type heros( though I'm sure they fit the bill) but those people who we can admire for setting the pace, ground laying that encourage us through our hobbies and interests on a daily basis.

Saturday was a good day for them. For me anyway. It was the 50th Anniversary get together for the Northumberland and Tyneside Bird Club at Newcastle Civic Centre. As well as modern day birding experts on a National level, older hands, founder members and ex pats all got together in one place.
We had a great day. 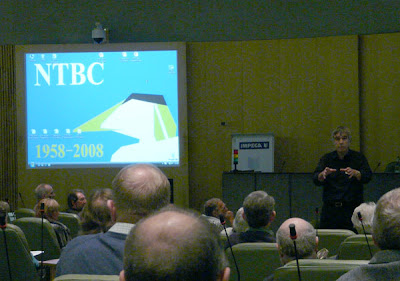 Above - David Parkin ex BOU Chairman and a founder member of the NTBC gives his talk. A professor in Genetics, David assited in the identification of the first Swinhoes Petrels in Europe through DNA from the Tyneside birds in the 90's. 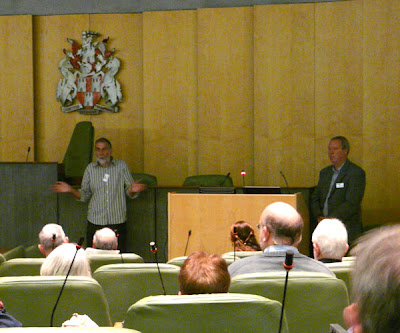 Above - Mick Marquiss ( left) and John Ginnever. John was a former chairman of the NTBC from way back and Mick joined the bird club shortly after its inception in 1958 aged 13! Mick is a scientist now based in Scotland involved in studies into the ecology of raptors, ducks and finches. 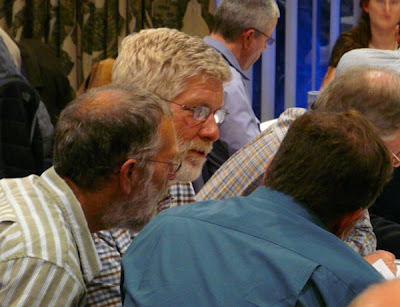 Above - Mick again, Eric Meek and Brian Etheridge getting stuck into the quiz. Eric is one of the big names from Northumberland, starting the Northumberland Ringing Group and being a founder of the NTBC now the RSPB warden for Orkney. 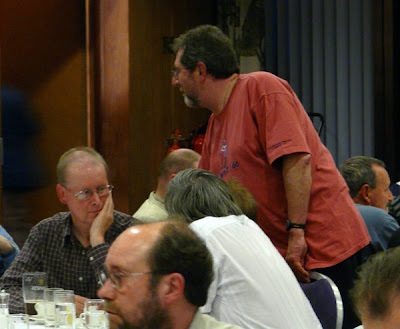 Above - Mike Natrass from the left, Alan Janes in the foreground, Roger Norman and Mike Hodgson. Mike Natrass was a great inspiration when I was training as a ringer. His calm, mild attitude at Hauxley Ringing Station was excellent for passing on his knowledge and Mike Hodgson was County Recorder when I joined NTBC in the 80s. Atlas organiser extraordinaire a good speaker in public and one to look up to. Both the Mikes have been members of NTBC for 45 years! 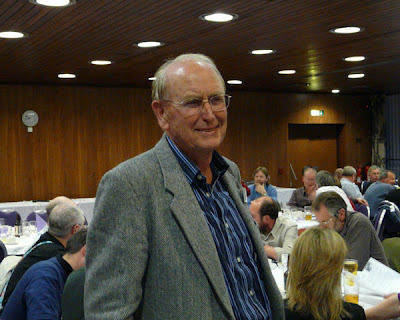 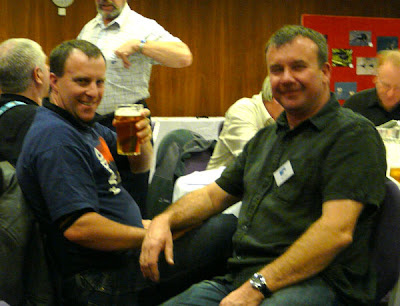 Above - Ian Fisher and Alan Curry. Following in the tradition of great county birders, Ian was an excellent county recorder for years in the early 2000's and 90's. 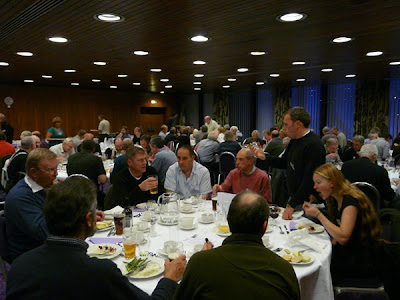 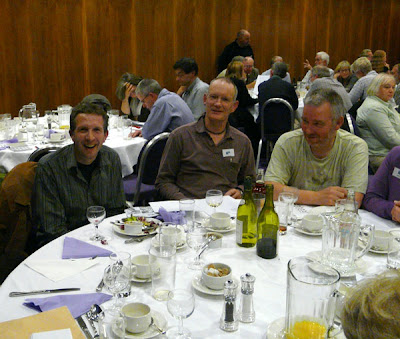 Just some of the great birders and field naturalists Northumberland has produced over the last 50 years. All worthy of hero status, if we mere mortals are half as good we are doing well. RESPECT!

I'll end with a tip from the top for beginners and not so beginners everywhere.

David Parkin ( I think) recounted a tale of himself as a teenager seawatching at Seaton Sluice. On producing a brand new copy of the Peterson Field Guide, Mike Bell told him to put it away and never take it into the field again. When asked why, Mike went on to explain that if he saw a bird he didnt know he must take notes then compare at home. Spend time watching the bird not watching a picture in a book. ' Once youve taken notes on 25 Dunnocks you know what a Dunnock looks like...'

Aye it was great night - really good craic - thoroughly enjoyed it. So did Ms Fairclough!

Well said Mr Sexton (althou not sure about the good CR bit.....;0)). Northumberland has produced many excellent field men (yourself included). It was an excellent day (apart from the footie score...:0(). Lets hope we're all around for the next one!

Hi, my father was Mike Bell, and I've just stumbled upon your blog site and read the Hero's article :)
I've got dad's collection of slides from 1966-2000. and I need to give them to a good home, He's labely nearly all of them and they're good pictures, mostly taken with a telephotolens, and probably taken on days out birdwathching with Mike Hodgeson,who's also mentioned in your article.
We also know Dave Howie, who I know did come up for the 50th anniversary of the Club.
If you're interested in dad's bird slide collection, please get in touch with me, and you can heve them :)
Louise Folkard nee Bell
e@mail
louise@saintlouise.co.uk