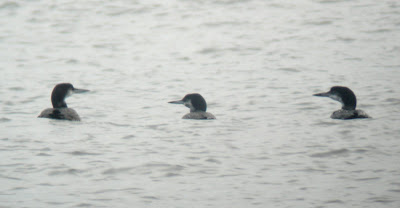 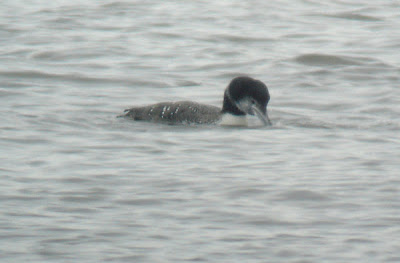 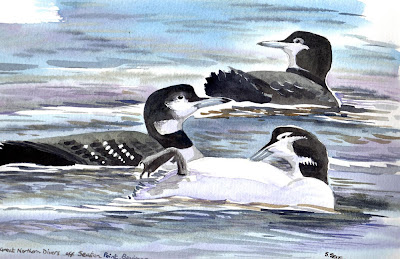 
Although the forecast was for rain, today was one of the best days for a while here. It was calmish with only a light SW2 with some cloud.

After yesterdays count at the north of the Boulmer patch, today, I didn't fancy another count ( it can stop the birding and is quite intensive)so I had a stroll around the south end from Seaton Point to the Haven and back.

The tide was full and the sea calmed as I rounded the point along the beach. I was pleased to find not one, but a flock of three Great Northern Divers feeding only a couple of hundred yards offshore on pipefish. Two adults showing traces of summer plumage and a juvenile showed really well for an hour or so before casually swimming off to the north. I saw the juvenile off the village later. Maybe it was yesterdays bird and todays were different?

I know this is not unprecedented in Northumberland, Newton Stringer had three yesterday, but these are scarce birds in the county. Its the most I've seen at one time thats for sure.

I did some sketches in the field and tidied them into this drawing at home later.

While drawing them the tide slowly dropped back. On the exposed rocks were 48 Grey Plover, 23 Golden Plover, 100 Dunlin plus smaller counts of Knot, Turnstone, Purple Sandpiper, Redshank and Oystercatcher. 6+ Red breasted Mergansers were fishing with the divers and two Red throated Divers flew N while 5 Common Scoters moved S. More unexpected were the 25 Siskins that flew south over the point and out over Foxton Bay. 2 Redpolls came in off then circled and flew N over the beach. When compared to the Reed Bunting flying alongside, they were probably Mealies.

On route back to the car, 40 Tree Sparrows, 6 Yellowhammers and 3 Reed Buntings were in the caravan site.

Not a bad morning at all.
Posted by Stewart at 7:13 pm

dont know what i like best the photos or the picture,love your drawings

Seen quite a few gulls and the odd kittiwake lately with pipefish dangling from their bills and struggling to get them down.

I am a birder from Sri Lanka and I have started blogging recently.
I would like to request for a link exchange with your blog.

My blog is http://gallicissa.blogspot.com
If you approve, please show it as Gallicissa (Sri Lanka)

An impressive tally of GNDs there, and an equally impressive drawing.

Looks like the big divers are keen on that part of the coast.

Hello all. Ta for the comments. This has been a good year for the divers here. In 2006 I didn't see a single GN Diver here. This year there has been loads plus three Black throats and the White billed. These Great Northerns have been a good comparison with the White billed. ALL GND's had sooty black napes regardless of age and all had grey or silvery bills with greater or lesser amounts of black at the tip...