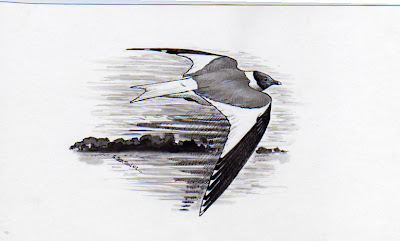 I was at Newbiggin working when news came through that JGS had found an adult Sabine's Gull loitering with a tern frenzy off the Church Point. As I was half a mile away, it would have been rude not to check it out...When I got there Andy had aleady picked it out at some distance feeding with Kittiwakes and Terns and the odd Little Gull. Even though the range was great it could easily be picked out of the group as it dip fed in the waves, thanks to its very distinctive upperpart pattern.

Top Tip for id'ing Sabine's Gulls. They are nothing like Kittiwakes. If you have a glimmer of doubt about that distant bird, its not a Sabine's.

While we watched a nice adult Pomarine Skua flew south panicking all the terns and a few Sooties flew north.

Now that has whetted my appetite I wonder what Boulmer will have...

Seawatch. Company was provided by TAC and a chap from Bolton who does Twite studies in the Pennines.

Sooty Shearwater 15 N
Manx Shearwater 16 N
Arctic Skua 5 N
Bonxie 1 N
Pomarine Skua 2 adults N. Both seen very well, both bedecked in full tail spoons. The first one chased a Kitti until it brought up its tea only to lose the profits to a Great Black Back. Not happy with this, the Pom took a dislike to the Kitti and hounded it that much I felt sure it would end up as a meal. The Pom ragged its wings and flipped it over several times before giving up and allowing its victim to move off in peace. The Skua then landed on the sea to bathe and rest before flying off north.
The chap from Bolton was pleased, it was only his second since one twenty years ago at an inland reservoir!
Whimbrel 1
Tea. 6+
Pale bellied Brent Goose 8 N