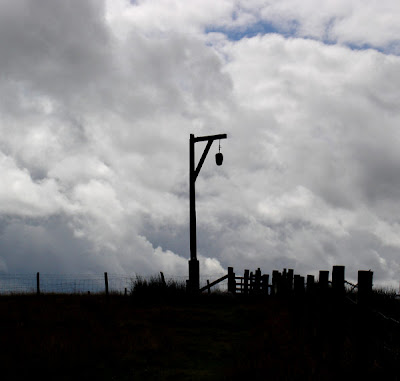 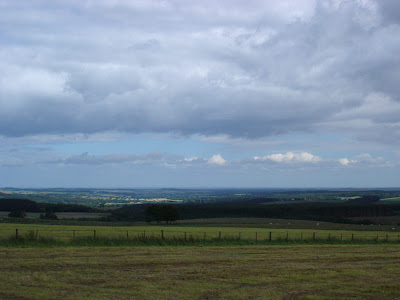 On our way back through the rural Northumberland countryside west of Morpeth, returning from the Otterburn Fair we pass this scene. Winter's Gibbet. It can be seen on the moor top for miles around and is there as a memorial to a gruesome murder that took place not far from this site. The tale is as follows, and may I warn you, its not for the faint hearted...

Elsdon is a small village about 12 miles west of Rothbury.

On August 10th 1792 William Winter and Jane & Eleanor Clark were executed at the Westgate, Newcastle for the murder of Margaret Crozier, an old woman at Raw Pele, a tower two miles north of Elsdon. Margaret Crozier died of a fracture to the left temple and strangulation although it is often stated that her throat was cut.

It is interesting to note that the executioner was also a villain. William Gardner had been sentenced to death for the crime of sheep stealing in Northumberland and agreed to be the executioner of Winter and the Clarke sisters. For this service he was reprieved and his sentence reduced to transportation to New South Wales for seven years.

Following the execution, the bodies were disposed of in different ways: the females dispatched to the surgeon's hall for dissection whilst the body of William Winter was hung in chains on Whiskershiels Common, a few miles south of Elsdon.

The body remained on the gibbet as a sight for the passing curious until the clothes rotted. Eventually the body was cut down, the bones scattered, and the skull sent to Mr Darnell of Newcastle.

In time the original gibbet decayed, partly due to natural processes and partly due to the quaint country practice of rubbing pieces on the gums to cure toothache.

Around 1867 Sir Walter Travelyan of Wallington ordered a replica, complete with wooden body, to be erected on his land. In time the wooden body disappeared following its use for target practice, till only the head remained, giving rise to the 20th century custom of hanging a fibre glass head on the replica gibbet.

Today the gibbet stands proudly high on the lonely hills above Elsdon.

But who was Winter?

William Winter seems to have sprung from Gypsy stock and was the end of a long line of criminals. For the last 18 years of his life he had been at liberty for only 6 months. A truly hardened criminal! In 1784 he had been convicted of stealing an ass and sent to the hulks on the Thames for seven years.Upon his release in 1791 he made his way back to the North of England where he seems to have taken up his old life style once more. But his liberty was not to last and he was apprehended following the murder of Margaret Crozier.

Margaret Crozier was murdered on 29th August 1791. When William was discharged from the hulks on 14th August 1791, he found that his father and brother had been hanged on 6th August 1788. The father of the Clark girls, Walter Clark was hanged with Margaret Dunn on 14th August 1793. The crime was burglary. The Winters, John & Robert, father & son, were executed for breaking & entering. A harsh sentence in a harsh day! All were classified as hardened criminals.

And the sequel to this sad tale:

Raw Pele, the scene of the murder was never again lived in, and the tower became part of the farm buildings, although much changed. The chief witness, a boy called Robert Hindmarsh (sometimes known as Robert Hymers) feared gypsy vengeance and moved out of the area; first to Bywell and then to Aberdeen. He eventually returned to his home, only to die in September 1803 at the age of only twenty-two.
Posted by Stewart at 8:01 pm

That is a very interesting tale. I'm sure their souls have lived on and seen many more sinister happenings in the years that followed.

Haven't heard that one or seen teh gibbet before. Shudder...

Great story I digiscoped the head once for a project I wrote there is moss on the head that looks like hair growing !!!!!!
Brian