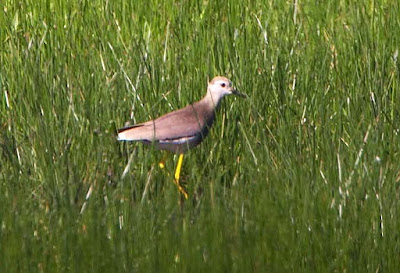 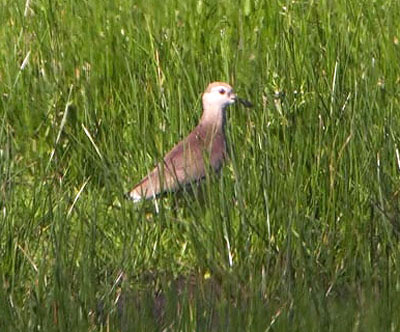 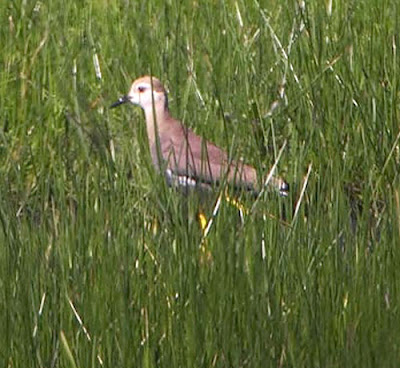 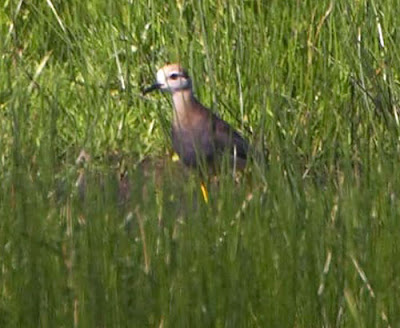 Above - White-tailed Plover, Caerlaverock, Dumfries and Galloway, today. ( Richard Dunn). Breeding on the Russian Steppes and wintering in Africa, migrates through the United Arab Emirates. Not SW Scotland.

You can never be sure just what is around the corner in this game, so, be prepared as the scouts say, be prepared.Luckily for me, today I was and had my gear in the car ready to go.

At work this morning, my pager switched to silent, I happened to glance at the small screen at about 1.00pm and noticed the word 'MEGA' in the bottom left hand corner. As this signifies something way out of the ordinary I was intrigued and mentally tried to guess what it could be. Some fly by seabird off the Hebrides perhaps or a yank sparrow on the Northern Isles, as is usual in these cases? What a shock when I read the words 'WHITE-TAILED PLOVER, CAERLAVEROCK'!!!!

Now this is where the headless chicken routine starts. An absolute blocking mega on the mainland and only an hour and a half from home, what was I to do? 11 text messages were sent to my friends who may be available and interested in such a thing and soon replies bounded back. One, from Richard Dunn, really got me thinking for all of five minutes. 'I'm going in the next half an hour, do you want to come?' At work, pre-arranged appointments were hastily rearranged and colleagues were begged into doing some for me, the boss was persuaded and a half day off was duely booked. 'Rich, I'll be there in fifteen minutes.'

Other friends had already travelled the hundred miles and were climbing out of the car when they replied to me. This bird was a must see and was the first for 20 odd years.

Richard and myself were at the Wildfowl and Wetlands Center at 3.30pm and had already been beaten to the goal by birders from as far away as Southampton. The weather here was in stark contrast to the dull cold day we had left back at home by being hot and sunny. The Plover was showing on and off in the rushes of a damp field at the far end of the reserve. Our main stroke of luck came as we were a hundred yards from the main hide and a fifteen minute queue to get in to see the bird, when an old chap told us the bird was visible from the hide right next to us with no queue.

We were immediatly given good views of this stilted lapwing as it preened and stood in the open about 70 yards away. Over the next hour it flew even closer allowing us time to scrutinise its every detail both on the ground and in flight and what a treat it was. In some ways a bit courser like but always very striking, particularly in flight. An absolute stunner, this is the first since 1984 when a single bird was seen in two different sites and prior to that one in 1979 and one in 1975. None of these birds were widely available to the masses so it will be interesting to see how many people make it in time to see this one.