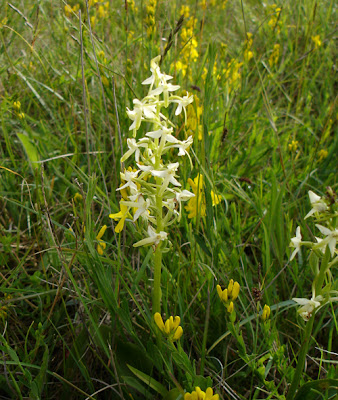 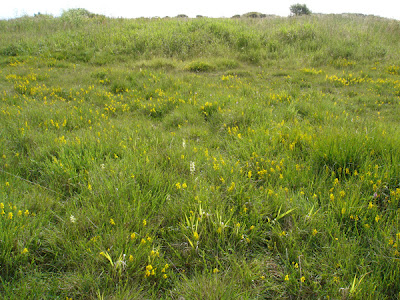 Above - Lesser Butterfly Orchid and its habitat, the plants surrounded by Dyer's Greenweed ( the bright yellow flower).

Above - Common Twayblade, another orchid in the same area. 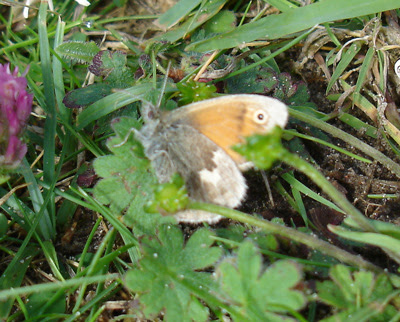 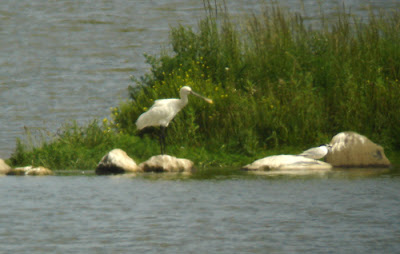 Today was very warm and mostly suuny with odd cloudy spells. I spent the morning Orchid hunting in the dunes at East Chevington and generally chewing the cud with the lads down there. A good way to spend the morning when the birding is quiet.

Apart from when the Spoonbill flew in from the south there was very little of note on the pools. A Grey Partridge gave a great show when it 'nutted' a magpie that decided to look for its chicks. Needless to say Magpie made its excuses and left. .

As for the flowers, a dozen Lesser Butterfly Orchids were still in flower, loads of Common Twayblades nearby but no sign of the Bee Orchids seen by Nigel last week? I'll try a more reliable site next week. One or two Dune Helleborines were budding and will be open in a week or so depending on the weather. Around the dunes were 2+ Small Heaths and the odd Common Blue butterfly.

This afternoon we checked the pastures near Alnwick Castle for Banded Demoiselle ( Damselfly) without luck. They were reported here last July, reliably, so I'll keep checking. Later on Jane, Bunty and I had a pleasant wander around the Seaton Point at Boulmer. There was no sign of yesterday's Bar tailed Godwit, or anything for that matter. Home via the Coach Inn at Lesbury where a Leveret dodged along the road and a pair of Oystercatchers had a fleged chick in the compound at the Boulmer RAF Radar Site. It should be safe enough in there, I mean, how many oykers have an armed guard and an ICBM listening device watching over them...
Posted by Stewart at 10:22 pm

Don't know if you have heard but there has been a Little Egret on the Aln, present Wed PM and SUN AM at least.

No I hadn't Alan, Cheers, I wonder if its the Hauxley bird?

Oystercatchers had a fleged chick in the compound at the Boulmer RAF Radar Site. It should be safe enough in there, I mean, how many oykers have an armed guard and an ICBM listening device watching over them...

This maybe so but, back in the 60's when my father worked there
foxes used to live beneath one of the buildings.

And good luck to the foxes I say, they need to be surrounded by razor wire for protection in this area...

Hi bb I had that seabird frenzy off Hauxley it was fantastic the sea was alive with birds started off trying to pick out a Roseate but soon gave up and just enjoyed the spectacle.
Brian