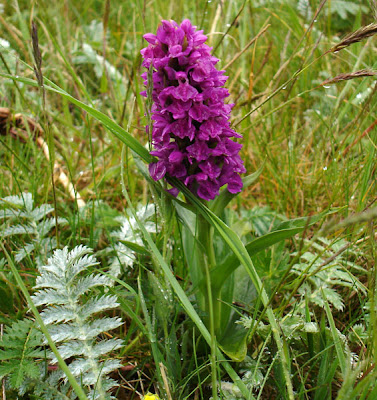 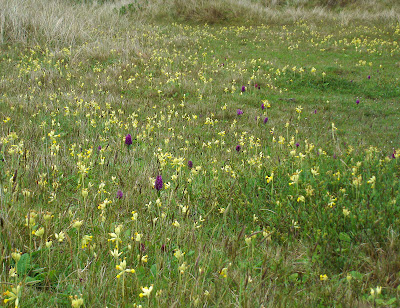 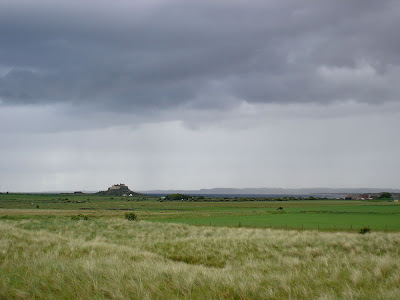 Today began with heavy rain and a light NW -NE breeze. Later on it was sunny with a strong NE6 blowing.

I started the day with high hopes of a good bird being grounded on Holy Island. Unfortunately it took me a couple of hours to find that there were no migrants let alone good ones on the island. The only pics today to brighten things were of the orchids in the dunes.

On my way back south I stopped at Monks House Pool and Newton Pool. Nothing much to report from either of these though I did find a Goldfinches nest with the female building at Newton.

So, as I was not having much success away from home it was back to Boulmer to see what I could salvage of the morning. I knew the tide would be well up by the time I arrived so I headed up to the north end near Longhoughton Steel for a sea watch and hopefully some close views of the waders.

I had only been sitting about 15 minutes when the wind suddenly strengthened from the north east giving me some hope of a seabird movement, and I didn't do too badly in the hour I was there. The list goes like this -

Bonxie ( Great Skua) 1N. As I watched through my scope I heard the gulls on the close rocks become agitated and glanced up to see a huge Bonxie come from behind me, over my right shoulder and stoop into the birds on the rocks before heading out to sea. Great Views.
Little Tern 5
Grey Plover 2
Knot 2
Whimbrel 1
Teal 3
Arctic Skua 2N one was just like the Bonxie and flew so close it could have crapped on me!
Manx Shearwater 39N Including a single flock of 27 birds.
Curlew 79
Sanderling 8
Common Scoter 6N
Eider 1 female with 5 ducklings just on the rock edges.

The white stork has, eluded you again.
Missed the L scaups, wasn't going to journey around as was on trusty bike. took a lot of effort to get there

One day Steve, one day.

Thankyou for identifying that purple flower - i ahve seen loads of them recently and had an inkling they were orchids of some description ...

glad to be of assistance...