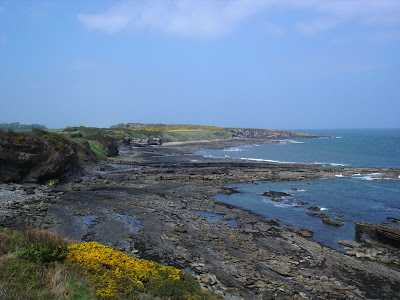 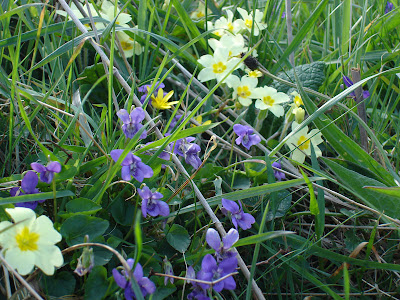 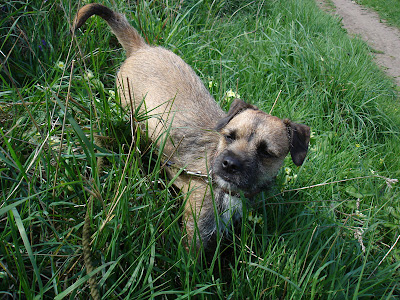 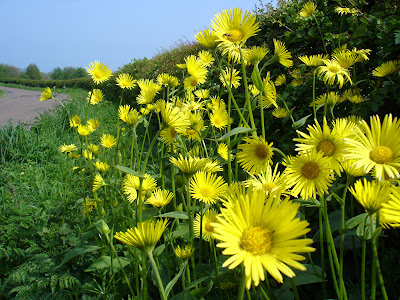 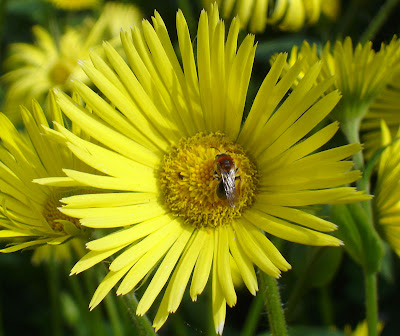 Above -
Cullernose Point from the south.
Banks covered in Primroses, Dog Violets and Celandines.
Bunts helping to look(?)
Leopards Bane growing along roadside.
Close up with some type of bee.

I walked Bunty along the cliff path here looking out for Star of Bethlehem that I found flowering here last year. I cant remember the date when I found one growing on the path side, but now is the time for them. No sign today.

Today started off overcast and cool but calm then by afternoon it was warm, sunny and breezy from the SE.

Boulmer was again very quiet this morning, with only two Wheatears on the beach and a Whitethroat in the caravan site hedge. 8+ Sandwich Terns were fishing offshore and 20+ Swallows hawked insects low over the beach.

At lunchtime I was out delivering flowers near Ashington so I called in to Bothal Pond. 2 Black necked Grebes resplendant in summer plumage with that ruby red eye were showing well, a drake Garganey was a bit more distant and 3 Common Sandpipers fed along the muddy edge. My first Swift of the year flew overhead and a couple of pairs of Tree Sparrows were chattering from the nearby buildings. Pity the camera was left at home!

Another drake Garganey was at Longhirst flash and I hear reports of two still at StMary's Wetland and one at East Chevington. This seems to be a good year for them.

Yesterday, I delivered some flowers to Rothbury and stopped to walk Bunty near Debdon Farm about a mile north of the village. I've never been here before but was well impressed. It was a moorland / upland wooded area with rocky outcrops. During my short visit a Tree Pipit was singing and showing well from a tree in the valley, a Cuckoo was calling nearby, several Redpolls were displaying, a Redstart was singing and a pair of Stonechats were on territory. Not bad in half an hour.
Posted by Stewart at 5:08 pm