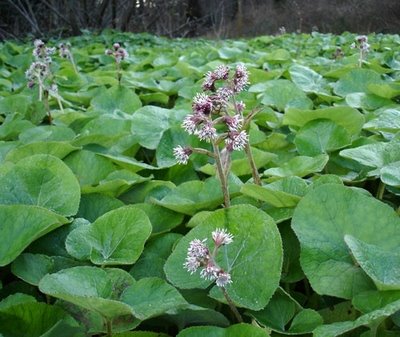 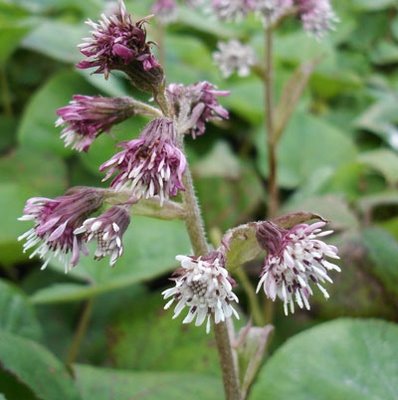 Above - Winter Heliotrope in flower near Howick along the roadside. A scarce plant up here, unlike the very similar Butterbur. 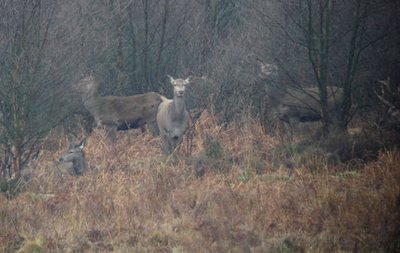 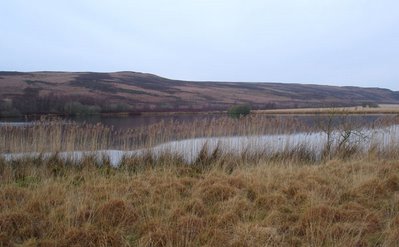 Above - Some of the nine Red Deer near Kimmer Lough ( below ).

This weekend has been cool with a light frost in the mornings. The rain that was forecast didn't appear until mid afternoon on Sunday.

Boulmer was very quiet on Saturday morning, so I gave it a miss today choosing to head off in land a short way. I checked out Kimmer Lough and some woodlands near Eglingham, only about six miles NW of Alnwick.

The moor at Kimmer Lough looks good for heathland species in the summer, but was almost bird free today. Highlight was a group of 9 Red Deer, the first I've seen in Northumberland. Maybe they are from nearby Hulne Park? Also here 2 Buzzards, 4 Red legged Partridges, 2 male Stonechats on territories as were several Reed Buntings. The Lough was devoid of life all but a pair of Mallards flushed. On the way back, a Roe Deer buck was trotting across a field but was gone before I could set up my camera. His little pronged antlers were blood red and the velvet was flapping around like an old glove. It seemed very irritating. In the fields 8+ Lesser black backed Gulls were soon to be heading to inland moorland breeding areas.

I tramped the wet woodlands at Eglingham and had a few interesting sightings but all made off before I could get a picture. A Woodcock was startling when lifted from underfoot, 1 female Lesser Redpoll showed well and close but not long enough, 1 male Great Spotted Woodpecker was drumming, 3+ Roe Deer and a Red Squirrel soon dashed for cover ( as you can see, I crept aroud there like a Ninja's shadow!). There were good signs of Badgers too, with their five toed pug marks in the muddy tracks and a few demolished rotten logs nearby.

At home 2+ Blackcaps still at the feeders.

This afternoon we had 4 Roe Deer in a field across the road from Warkworth wier, making a total of at least 17 deer today, not bad.

It's not blurred - it's ethereal!

1. Characterized by lightness and insubstantiality; intangible.
2. Highly refined; delicate.
3.a. Of the celestial spheres; heavenly.
b. Not of this world; spiritual.

I've seen a blackcap in my garden. I am advised they are not a common winter bird in the NE. I've only seen a male though. I think it must be just the females that go south.

love the deer. goodness knows how you manage to get them to wait while you take a photo

Hi Arthur. The Blackcaps that winter here are not the ones that summer. We get birds from breeding populations in Germany and eastern europe over here in winter while ours go south.
As for the deer, they were half a mile away when I took the pic!
Keep putting the nuts out and I'm sure your GSW will return...