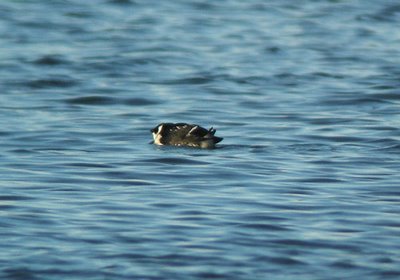 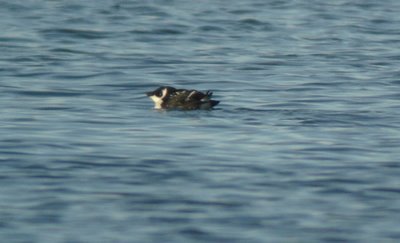 On Wednesday 1st November 2006, the wind blew a gale from the N all night and on into the daytime. At Boulmer, the sea was about as mountainous as I've seen anywhere in the county. Pity I didnt take the camera. It was much too rough to pick out any seabirds, and the only thing of note was a female Merlin that caught a dunlin off the beach right in front of me.

On Thursday 2nd November 2006, the wind had decreased to a force 2 Northerly, the sea had dropped right off and it was a nice day.
Its at times like this that having a full time job really gets in the way of real life! I managed a half hour at first light at Boulmer and had -
13+ Little Auks
1 Slavonian Grebe
24 Goldeneye
1 Red throated Diver
14 Red breasted Mergansers
1 nice male Long tailed Duck on the sea
65 Wigeon
25 Mallard
5 Teal
40 Pink footed Geese flew S.

Meanwhile, later on in the day Rob kept me nicely up to date with his efforts -
2 Bewicks Swans flew SW ( a patch tick)
1 'Lesser' Canada Goose flew south with a Barnacle Goose for excellent size comparison, the Barnacle being the largest of the two ( another patch tick )
and
700+ Little Auks skittering along, one or two even flying through the village and going inland!

I haven't even had one of those giant Canada Geese that come to groundbait for the year list never mind a true rarity, and as for Bewicks, well I might wait a while for one of those too. Lets hope that something is lingering till the weekend...
Posted by Stewart at 6:02 pm