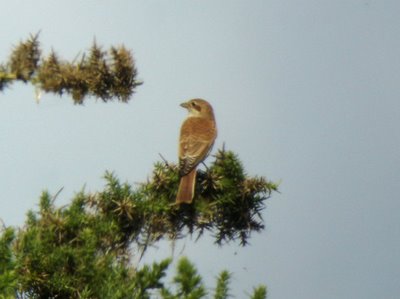 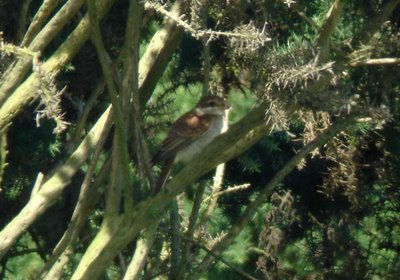 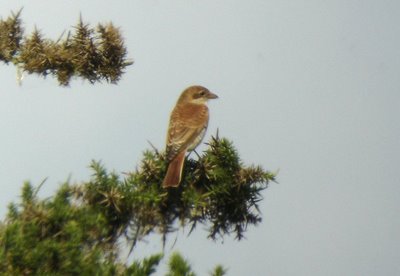 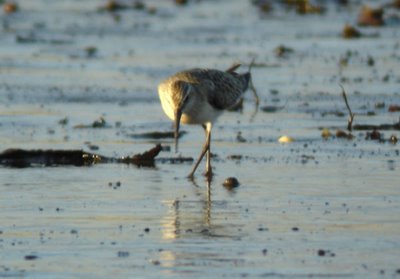 On a moderate westerly wind with clear sky, Julie Roper and Winnie Banks found a nice juv Red backed Shrike in the gorse near Sea Houses Farm, Howick. Unlucky for me, this is just outside my Boulmer patch, but within eyesight of it. The bird was quite flighty and remained in cover for quite long periods. I wonder if it was left over from last weeks fall?

Nearby the highlight at Boulmer was a Curlew Sandpiper and 3 Yellow Wagtails. 2 Lesser White throats were in the golfcourse scrub.

Changing the subject slightly, Andy sent me a message last night telling me that the roaming White Pelican was at East Chevington. As we were nearby at Morwick Ice cream shop we decided to pay it a visit. It was roosting on the middle island, looking like a cross between a spoonbill and an abandoned fridge. It lifted its huge bill out once to yawn ( terrifying a cormorant nearby) before getting back to sleep.

This morning we had it soaring over the south pool at Chevington dwarfing everything else nearby before drifting out of sight towards Hauxley.

Could it be a wild bird? It has apparently been to Holland in May, then Germany, back to Holland, Norfolk, Lancashire and Teesside before ending up here. See the May issue of Birding World for a photo.

I enjoyed it where ever it came from!
Posted by Stewart at 1:38 pm