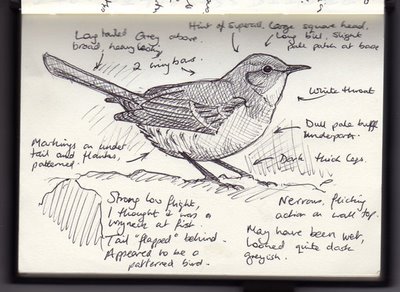 The weather was quite poor. NNE 3, foggy, poor visibility etc. I was hoping for a fall of migrants that might include one or two year ticks or even better. As I was in charge of Bunty this morning 'proper' birding was out of the question so I decided to walk north from Boulmer around the headland to Low Steads and back. This area reminds me a bit of Newbiggin Golf Course and we all know what Jimmy and Stef have turned up on there in recent years so off I set with my mind set firmly on a wryneck.

The area was devoid of birdlife until I reached some nettles on the cliff top at the far end. Here I flushed a bird that I thought could be a wryneck. The size looked good. It flew a good way along the cliff behind me so I set off for a better look. I saw the bird another twice but could not get a handle on it at all due to the fog and brief flight views. Then, a Rock Pipit flew out of the grass onto the beach. Surely not. There's no way I would mistake a Rock Pipit for a wryneck. Then 'my' bird flew again, west, right over the grassed area and I lost it at the stone wall. A short search produced nothing so we restarted our walk as far as the Low Steads Gully and back along the beach. It was suprising how little there was to see.

As I got back to the track just south of the old pumping station I noticed a bird sitting on top of the stone wall. On raising my bins they were steamed solid and I couldn't see a thing. Frantically cleaning my optics with the care and precision they deserve ( using my t-shirt) I could finally nail my target. A great big chunky BARRED WARBLER!Tremendous.

It continued to hop along the wall in a nervous manner for a while before flying 10 yards to the north and landing again. It then flew into the grass field near the burn and dropped out of sight into a large clump of thistles.

An excellent patch tick, the first for Boulmer, number 137 for the year. This weather looks set to continue for a day or two so there may be more good birds yet to be found. Here's hoping.
Posted by Stewart at 10:30 am