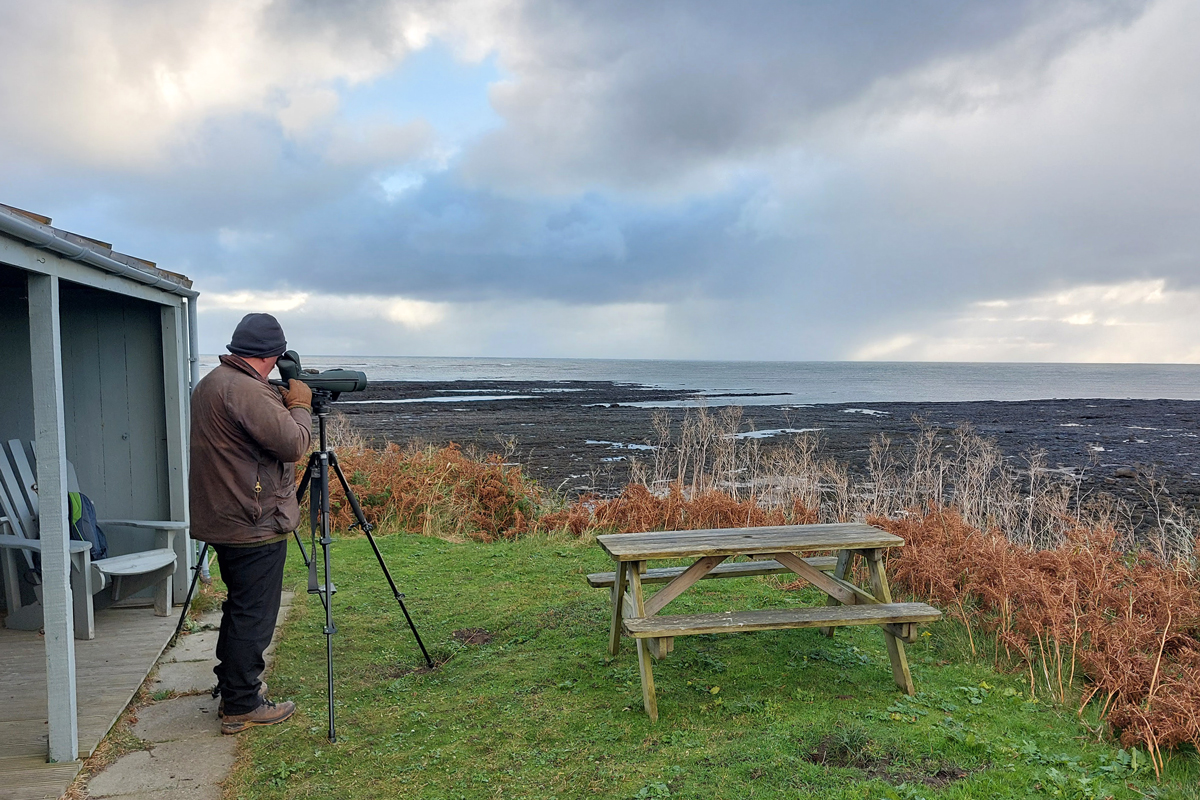 The weather forecast looked promising for a seawatch this morning. The wind was curling over the north of Scotland and down into the north sea, giving us a force 5 NW'erly. There was also a 30% chance of some precipitation too, but we didn't realise that seemed to translate into torrential sleet for a third of the time we were out.

We arrived at Boulmer at first light but had to wait in the car for the first of the squalls to subside before deciding what to do. Eventually it faired up enough to walk out south down towards Seaton Point. By the time we arrived, the sky was darkening again and curtains of sleet were heading our way. This is when we took advantage of the winter caravan site being empty and stood in the lea of this cabin. Strictly speaking we should not have been there, but the place was deserted and apart from this blog we left with no one being any wiser of our presence.

With the tide on the ebb, viewing wasn't ideal but the close sea south east of the point was sheltered by the land mass and a lot flatter than the wider sea slightly to the north and east. This meant birds were taking advantage of this and skirting just beyond the rocks and inside that line of breakers you can see in the photo above giving us good views in decent light. As further squalls arrived we just took a step backward under the porch canopy until it passed then we would pop back out again.

Little Auk 3 singles, 2 of which landed and bobbed around in floating weed for a bit before continuing north.

Black throated Diver 1 north, close in then landed where it was seen breifly on the sea then lost in wave troughs.

Velver Scoter 1 N over the rocks.

Purple Sandpiper 3 on the shore and 1 N

No Fulmars seen, Gannets, Kittiwakes, Gulls and larger auks not counted, but a steady movement throughout. Odd Common Scoters, Eiders, Mallard and Wigeon milling around too.

So far so good. It was time to head back between storms. Peering out, the north sky looked blue and clear so off we went. Its about 1 km back to the car and as you expects, yes, we didnt make it. After only a third of the way, the black clouds raced over and hit us with driving sleet, right in the mush!

Back at the car, I was soaking with water running off my gear into the boot. Definitely time for home to get warmed and dried, still that was maybe the best local morning we have had for a few weeks...