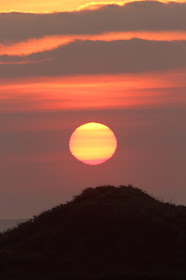 Today, we had a plan.

I was to meet John at Alnmouth, we would have a look down to East Chevington for the Cetti's Warbler then a run on up to Budle Bay for wild Canada Geese.

That started to change when I had a call from John as I left the house at 6.40am saying that he had a puncture, could I pick him up. That was the easy bit done, so should we head 10 miles south or 15 miles north? The Cetti's won, being a county tick for us both, so we arrived on site just at sun up.

We were soon in the right spot awaiting a machine gun blast of Cetti's wake up call, but all was quiet. Two cream crowned Marsh Harriers, 9 Pintail, 57 Tufted Ducks, 15 Little Grebes with loads of assorted commoner wildfowl kept us occupied, while over head there was a light trickle of visible migration with a few Redpolls, Skylarks, Meadow Pipits etc heading south overhead.

Half an hour later, Dave Elliott appeared from the small steel hide in the corner and indicated that our bird was vocal, even though we couldn't hear it over the breeze. We nimbly (?) clambered over two fences and a ditch to get to the spot but the reeds were silent. Apart from John and myself, Alan and Andy were with Dave hoping to get a view of the Cetti's. I would be pleased to hear it. Then very faintly I heard a distant rattle. No one else moved. I must have imagined it. Another few minutes passed and again there it was, this time Dave and John heard it but it was very faint. After a while it came a bit closer and we could all pick it out doing its choppy song deep in the phragmites.

Now, this steel hide is, lets be honest, bloody awful. Every movement by its tenants sounded like a drum solo, and it did its best to shield us from all outside sounds, so off we popped outside to see if that was better. Dave left us to continue his search elsewhere but we lingered on hoping for a view.

After a while we were joined by top father and son team, Tariq and Jonathan Farooqi, Bob Biggs, Chris Barlow and Gary Wren, all hoping to add this skulking warbler to the county list.

A few more larks and pipits headed south followed by a low fly past from a Grey Plover, lit beautifully in the morning sun, then, at 9.25am, things took a very surreal turn.

I heard from above and behind us a loud 'blloop' or 'blleep' call. A single note. Down in the subconscious, it made me freeze and every thing seemed to stop until the Farooqi's said 'Bee-eater!'

I looked up and there straight above was a lone Bee-eater! I could not believe my eyes. We are in Northumberland in October with a Shorelark 300 yards away and I am watching the slim, spiked form of a Bee-eater! Then, Farooqi Jnr called 'there's two!' and sure enough, a few yards behind the first was its travelling companion.

A panic ensued to ensure all present were on these fast moving small birds in a featureless sky and luckily all present indicated success. The birds continued north to Druridge Bay Country park giving glimpses of blue, turquoise and orange from a generally silhouetted small dot in the sky.

John kept them in his scope for a full 10 minutes until they just vanished into the distance over Hauxley.

I am not ashamed to say, the air was punched! Bee-eater is much sought after in the  county with no real twitchable birds ever, so to jam in on these two was amazing!

After the adrenalin pumping excitement, the Cetti's was all but forgotten, a nice juv Black Tern flew in briefly and then south and I didn't even care about not getting on to the Bittern that flew up briefly near us. No, the morning was a good one, and I am sure the tale will be regaled well into the future. We didn't make it up north for the geese either.

For the few birders at the other hide who missed them we were genuinely gutted, but now the day is done, I am just sitting here basking in my first Northumberland Bee-eaters!    Things don't get much better...