Not the rarity we anticipated....

With the final throws of Autumn upon us it was with some eager anticipation this morning dawned damp and overcast with a light SE breeze.

As I stepped out of the house in the gloaming at 07.10, the sky was full of calling thrushes. Fieldfares, Redwings and Blackbirds were arriving in good numbers for the first time this season. This made me keen to get to Boulmer to see what might have pitched in. Last night on social media there was some daft chat about Rubythroats, Accentors and the like, but I was hoping for a Long eared Owl, or Black Redstart maybe.

Boulmer car park was ominously quiet with little arriving. A party of 10 Fieldfares W, was about as good as it got. John and myself  'smashed' Seaton Point grafting until our eyes bled. Well, maybe not but we did wander around looking at bushes and listening for calls for a couple of hours. Another 2 Fieldfares, a Redwing, 20+ Dunnocks were as near as got to migrants, but 2 Great Northern Divers flew North over our heads and a third North out to sea.

Not to be thwarted in our search for something, we retired to the car for sustenance that was made  up of a Greggs Cheese Pasty, a Chocolate Eclair and a mug of tea. That got us going a bit so we planned to head North now searching the rocky shore on the way with thoughts of a rare wheatear. Unfortunately, this plan was rapidly changed as we passed the Village front and a very unusual What'sApp message came through -  Walrus at Seahouses.

Could this be the return of professional dinghy sinker 'Wally' who wreaked havoc all down the west coast from Wales to Scilly to Spain and Ireland in the summer? Whatever, this is a very rare occurrence indeed so, it may not be a Rubythroat but we were soon in the car and off to Seahouses to see for ourselves.

Quite a crowd was already watching the Walrus, hauled out on a breakwater in the harbour. It looked like a huge, ginger sofa or maybe a fly-tipped carpet and didn't seem to be in a hurry to get off. We could watch it down to about 30 yards without it being in the least bit concerned.

The Marine Mammal Medics were on site to monitor the animals welfare. It seems to be a female called Freya who was last seen sleeping on a Dutch Submarine in late October. Comparison of the marks on its flippers seem to agree with this theory. See this link to an article in the Guardian.

Occasionally Freya would wake up and stretch, have a look around at its new admirers before going back to sleep. Never has an animal looked so comfortable on such an uncomfortable bed. After the Humpback in January, now Walrus is another arctic marine mammal to be added to the Pan species List. If she lingers it is well worth a visit. What a beast... 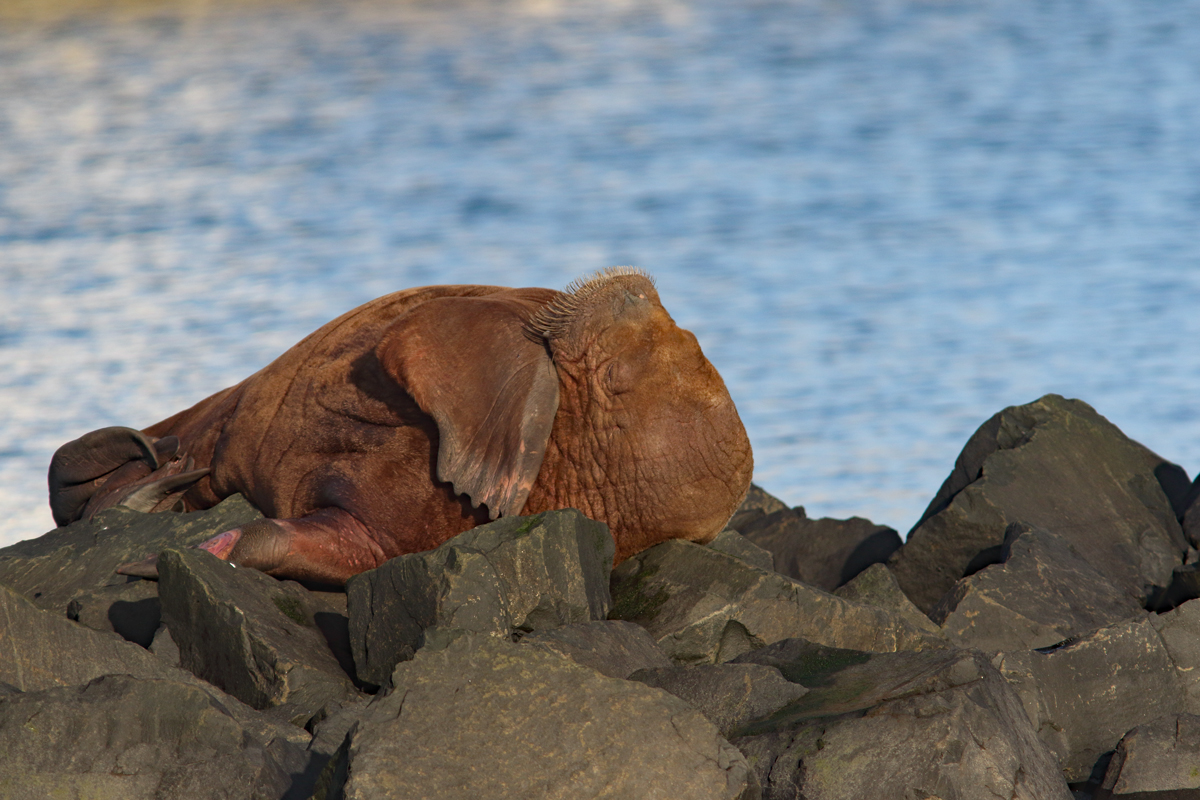 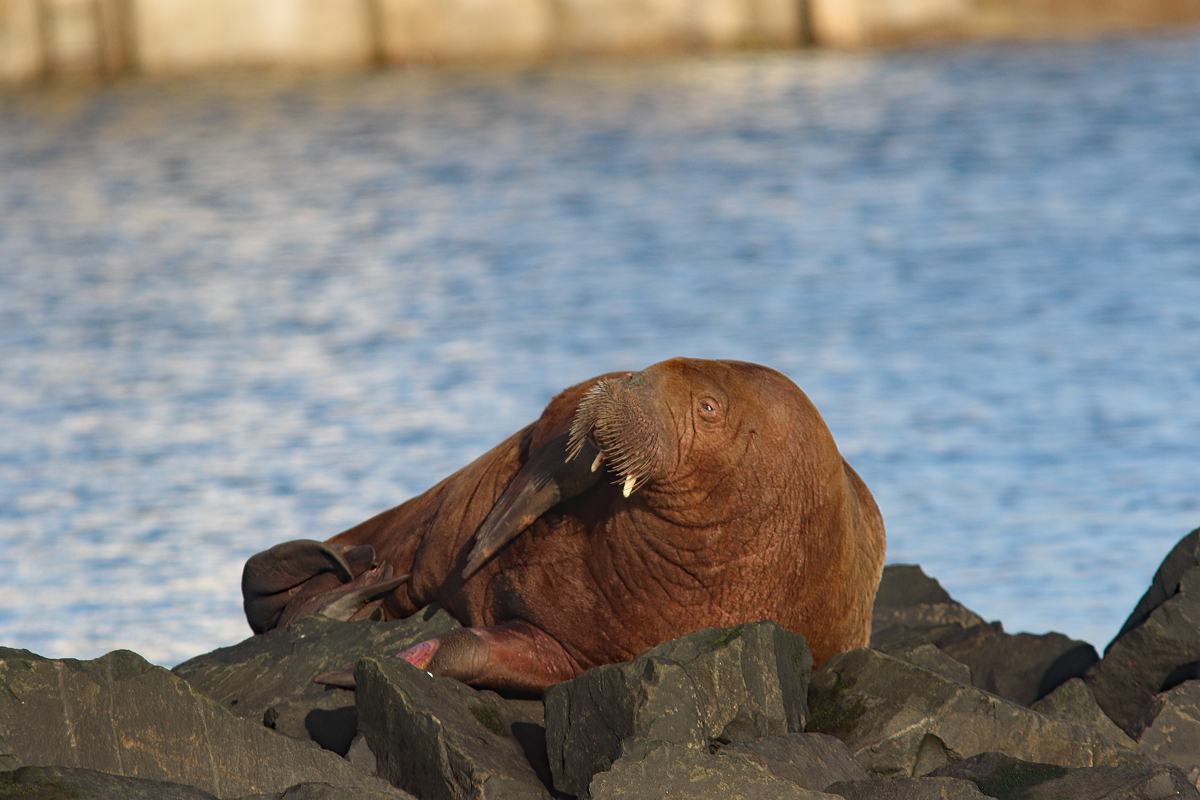 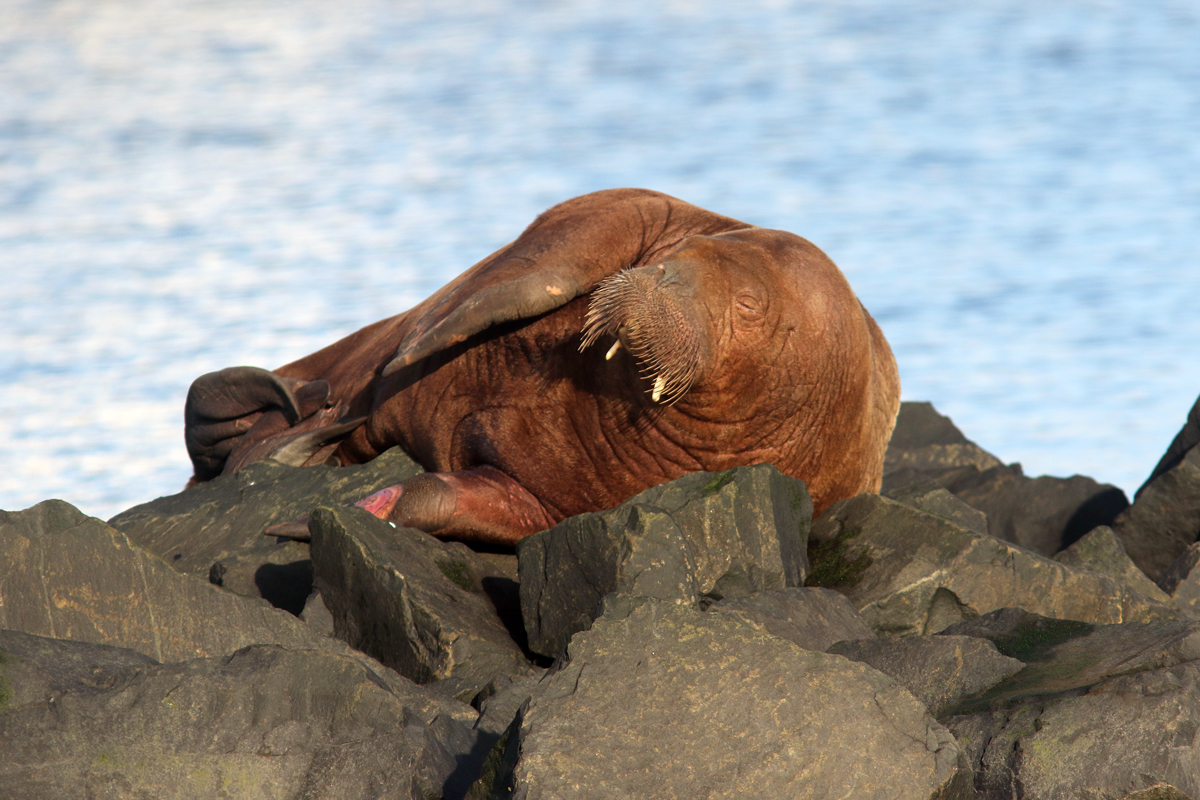